Peace on the waterfront 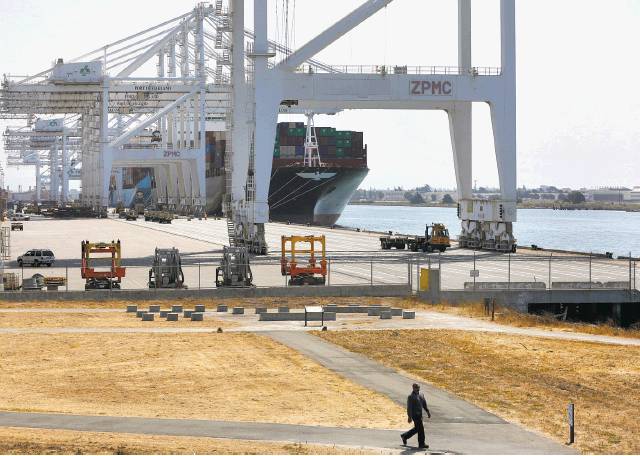 Longshoremen work at the Port of Oakland, a major shipping center where they are covered by a contract extension. 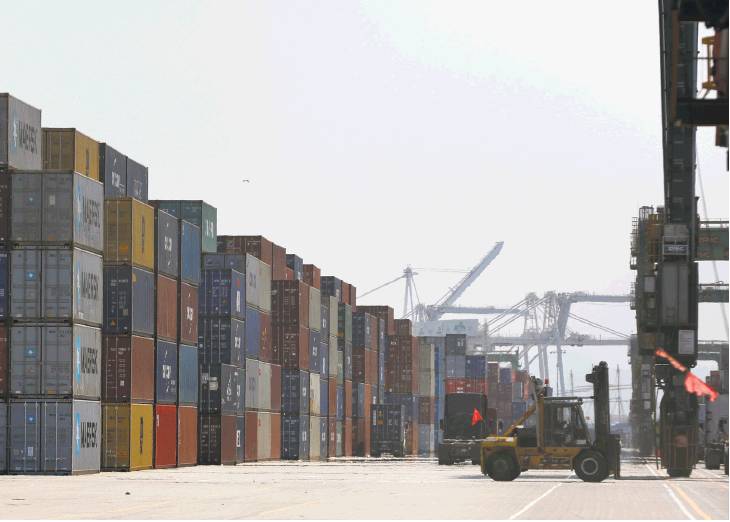 A worker drives a forklift around shipping containers at the Port of Oakland, which has agreed to a three-year contract extension.

The two sides have engaged in perpetual conflict, traded accusations, and caused collateral damage across the country. But for the good of everyone, they put aside mutual acrimony and reached a compromise.

No, not Republicans and Democrats, but rather dock workers and West Coast port operators and shipping lines.

The longshoremen’s union and the Pacific Maritime Association recently agreed to a three-year extension of a contract that ensures labor peace at 29 ports, including Los Angeles and Oakland, through at least 2022. The first-of-its-kind agreement means the country won’t see a repeat of three years ago, when a work slowdown delayed shipments from Asia and cost U.S. retailers millions of dollars in lost holiday sales.

“We’re very happy,” Chris Lytle, executive director of the Port of Oakland, told me. “We see great benefits of the contract being extended in terms of reliability and stability (of port operations). That’s a very big thing. A lot of shippers were hurt” during the 2014-15 slowdown.

Since the turn of the century, the International Longshore and Warehouse Union, which represents 20,000 port workers, and the maritime association have been locked in a perpetual cycle of brinkmanship in negotiating six-year contracts, often resulting in lockouts, slowdowns and outright strikes.

That’s why the recent deal is so notable: Instead of waiting until a contract ends to negotiate a new one, the union and the maritime association signed an extension a good two years before the current deal expires. In effect, the union abandoned a strategy historically designed to give it maximum leverage over the ports and shippers.

Union officials seemed to acknowledge that this shift would upset some workers.

“During the past year we saw a healthy debate and heard different points of view, with concerns raised by all sides,” union President Robert McEllrath said in a statement. “The democratic process allowed us to make a difficult decision and arrive at the best choice under the circumstances.”

The union, which said 67 percent of workers approved the extension, did not disclose contract details other than to say the deal increases wages and pension benefits.

Perhaps the union overplayed its hand during the last conflict. The Federal Reserve suggests the dispute was a big reason that the gross domestic product declined 0.2 percent in the first quarter of 2015. The central bank estimates that West Coast exports fell 20.5 percent in the quarter while imports dropped 9 percent.

But the dispute particularly hurt retailers. Companies such as Gap and Williams-Sonoma, both based in San Francisco, heavily depend on Asian factories to make merchandise. Retailers typically order holiday goods in February and March and receive them by early fall. The four weeks between Thanksgiving and Christmas can account for nearly a third of annual sales, so any delay can really hurt a retailer.

“It was a disaster,” said Brian Kilcourse, managing partner at RSR Research in Grass Valley (Nevada County). “You can’t sell products that are still on the water.”

Williams-Sonoma blamed the port slowdown for wiping out $30 million to $40 million in revenue for the first quarter of 2015.

The prolonged conflict embarrassed President Obama, whose efforts to expand the economy depended on boosting U.S. exports to Asia, including through major trade deals like the Trans-Pacific Partnership. In February 2015, Obama sent Labor Secretary Tom Perez to San Francisco to pressure both sides into reaching an agreement.

But as the conflict wore on, there was growing talk in Washington of using the Taft-Hartley Act to force open the ports. In 1981, President Ronald Reagan invoked the law to order striking air traffic controllers back to work. He eventually fired more than 11,000 workers who refused to do so.

Kilcourse also noted that the labor conflict prompted retailers to bypass West Coast ports altogether by rerouting goods through the recently expanded Panama Canal or to ports in Canada and Mexico.

The union might have also considered the current political situation. President Trump has been a vocal opponent of trade agreements; he pulled the United States out of the Trans-Pacific Partnership, a pact that would have greatly benefited West Coast ports, and threatened to rip up the North American Free Trade Agreement.

Trump is also threatening China with trade sanctions, a move that will surely lead to Chinese retaliation. A trade war with China would be devastating for West Coast ports: China is the Port of Oakland’s top trading partner, accounting for 30 percent of total trade from January to June this year.

At a time of such geopolitical uncertainty, peace at home seems worth the price.