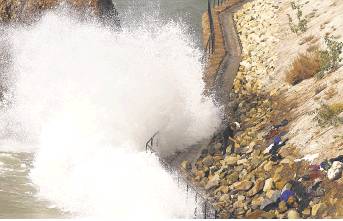 High surf crashes into the sea wall at Will Rogers State Beach along the Pacific Coast Highway in Los Angeles County.

Climate change is running smack into property rights in the form of a pending law that would rein in scofflaw homeowners along California’s coast. The measure’s fate is a test of how serious state lawmakers are about facing the challenge of rising sea levels washing 1,200 miles of shoreline.

The issue focuses on emergency permits generally granted to property owners to protect cliff- or beach-side homes when storms blows in, as happened frequently last winter. Worried homeowners are allowed to dump rocks and build seawalls to protect their homes, on the promise they’ll later seek a full permit from the state’s Coastal Commission.

That doesn’t always happen, often with dire consequences. The “shoreline armoring,” or erosion controls, can direct waves and currents to other properties, pull sand from beaches and curb public access. The initial action to protect a surf-side structure from encroaching waves creates a ripple of larger and lasting problems.

By one count, 241 emergency permits were issued over the years, but only 10 holders returned to work out a long-term fix as the rules require. Assemblyman Mark Stone, a Democrat whose district surrounds Monterey Bay, wants to add penalties and a quicker process that would restrain the dump-and-run property owners.

The bill, AB1129, has passed two Assembly committees and now faces a vote by the full chamber. Dug in against it are real-estate and property-owner groups. They argue that giving the Coastal Commission more power will add red tape, chill land values and take away a valuable tool in warding off rampaging nature.

The rising sea levels aren’t listening, and the state needs a response.

Under Stone’s bill, a property owner would be obliged to return to the coastal agency on a tight timetable after getting an emergency permit. The commission would study the situation to determine if there would have been other ways to have handled the battering waves. If so, that could lead to considerable expense in trucking away the erosion material or taking out structures threatened by a crumbling cliff or ebbing sand dune.

But these are the steps needed in shaping a more resilient coastline as ocean waters rise. A concrete wall doesn’t always provide the long-term protection it promises.

California lawmakers are pledging to answer the issue of climate change, including the surging tide. Building seawalls and rolling out a rip-rap line of boulders may fit some spots but shouldn’t be the go-to solution.

Nature’s looming changes impose a genuine hardship on sea-vista homeowners, making the right response critical. The bill before the Legislature recognizes the challenge in the right way.

Get the latest updates on BPC events, meetings, and efforts.