Rising sea levels could be worse than suspected 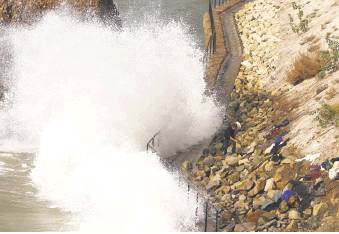 High surf crashes into a sea wall at Pacific Palisades. A study finds that rising sea levels will double the risk of flooding.

The effects of rising oceans on coastal flooding may be even worse than we thought. Scientists have found that a mere 4 to 8 inches, of sea level rise — which is expected by 2050 — will more than double the frequency of serious flooding events in many parts of the globe, including along the California coastline.

The findings, described in Scientific Reports, highlight the environmental and economic impacts of sea level rise on coastal areas, and the need to properly predict and prepare for these effects.

As global warming marches onward and land-ice reserves continue to melt into the seas — thanks in large part to human-produced greenhouse gases — oceans are continuing their upward creep.

Researchers have long made global-scale estimates of sea level rise and analyzed what effects the ocean’s ascent will have on coastal erosion, on the environment and on human communities. Those estimates have taken into account storm surge and tidal fluctuations, among other variables. But they haven’t included a crucial factor: waves.

“Most of these tide gauges are within harbors or in protected areas, so they don’t record any water level associated with waves,” said Sean Vitousek, a coastal scientist at the University of Illinois at Chicago.

Waves might seem like small potatoes compared with high tides, but they can have a big impact, Vitousek said.

“Waves often generate a pretty significant portion of the actual flood levels,” he explained. “For instance, if you think about just tides and storm surge, then in some areas, waves can add an additional 50 to 100 percent of that existing water level.”

That’s particularly true in California. Much of the flooding in the state is dominated by wave-driven events — which is why El Niño years with extremely large waves can have such profound effects on coastal erosion. A recent paper by one of Vitousek’s co-authors showed that the 2015-16 El Niño season caused unprecedented levels of erosion across much of the West Coast.

Even on islands in the Pacific and other equatorial regions where waves are smaller and the tides bring only a few centimeters of change, waves can have an outsize impact — in part because humans may build closer to the water line in those areas and be unprepared for the rise in sea levels.

The effects will be most pronounced in the tropics, the researchers found. Areas such as the Marshall Islands in the central Pacific are particularly vulnerable.